This week Julius and I talk about the time travelling game The LOOP.  More specifically, Julius tells me about the game.  It's got strikingly fantastic garish art and interesting game play.  Note that both of those facts are good things. 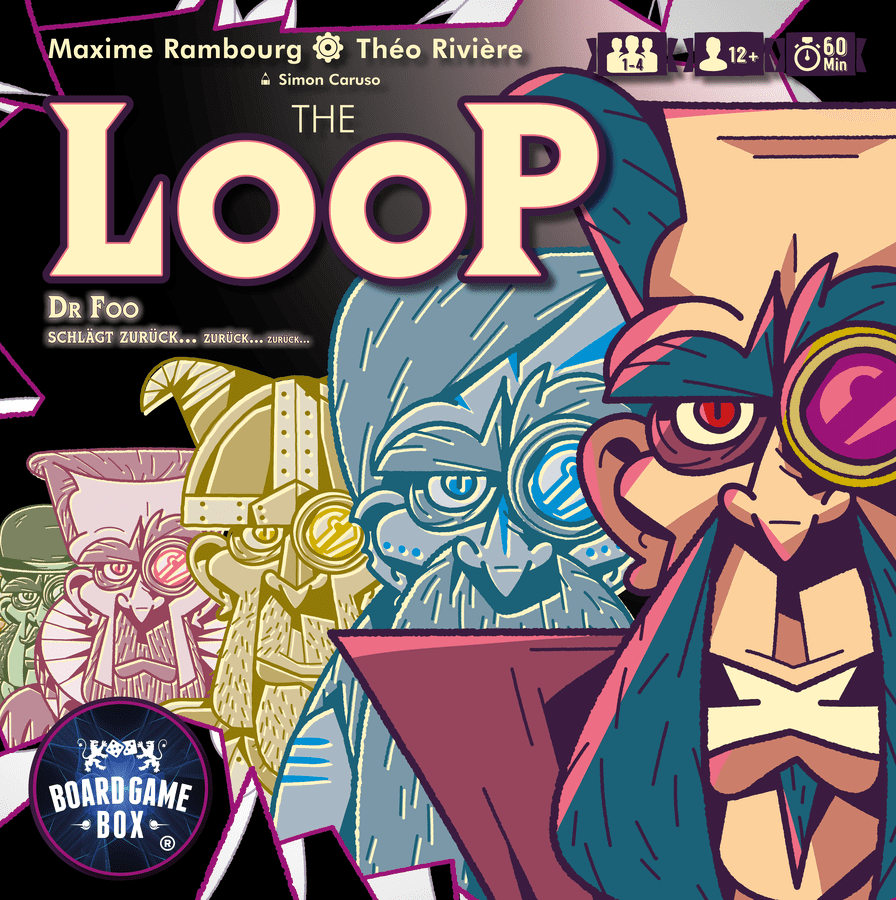 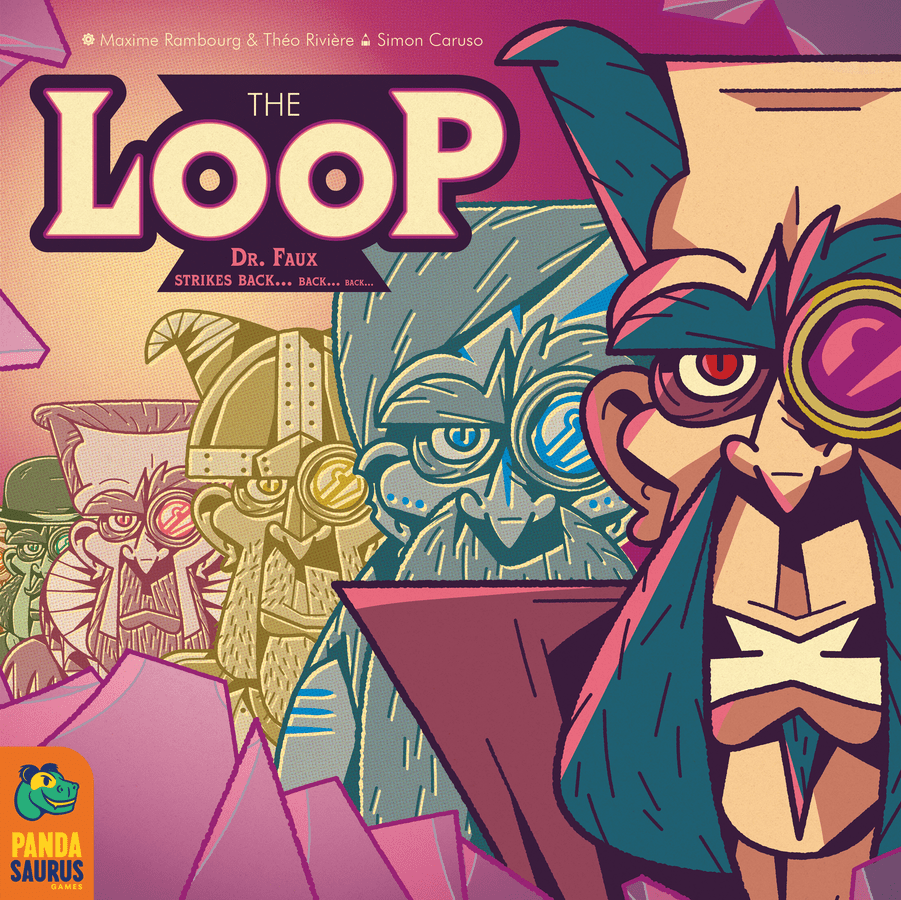 This week Julius and I look at something a bit different.  The Curioius Correspondence Club is a subscription service that will send you an escape room style mystery every month.  It comes in the form of a letter with all kinds of papercraft items that you use to solve the mystery.

Each letter is just about self contained, other than the internet you need to enter the final answer once you have solved all the puzzles.  You can also look at layered on-line hints if you get stuck with a puzzle.

You ship got a bit too close to the sun and are now being pulled in. Sadly, your ship is suffering malfunctions due to the intense heat of the sun.  You need to rep[air all the modules as they break around you and divert power to the engine so you can escape the Sun's gravity.

This week we have a small episode in which I teach Julius the small game Solar Storm.  This is a fun little pandemic style cooperative game in a very small package.

1P 238 - Worldbreakers: Advent of the Khanate

This week I interview Elli Amir, designer of the game Worldbreakers: Advent of the Khanate.  This is a two player card game with a solo campaign mode which will be coming to Kickstarter in March.  I really enjoyed this conversation with Elli, not only did they talk about the game and the solo mode for the game but they told me a bit about the process of commissioning art for a game.  I really enjoy hearing the backstory for games and game design.  This was a really good conversation and I look forward to seeing more of the game, which can be tried for free on Tabletopia!

This week Julius tells us about the Plaid Hat Games game, Forgotten Waters.  This is a family friendly piratical adventure on the high seas.

Today Julius and I bring back a classic game to the table.  We are looking at the 2013 Solo PnP Design Contest game, Maquis by Jake Staines.  The second edition of this game was just published so we look at it again.  The published version is quite a nice package and very well worth looking into.

Julius and I talk about the RPG Ironsworn, designed by Shawn Tomkin.  The game is a full fledged RPG that can be played solo or co-operatively and can work equally well either way.  It's set in a fantasy world that you define.  It's quite a good game... and really an excellent RPG all around.  It's available for free to download or you can purchase physical copies of the book.  If the fantasy setting isn't your thing, you can check out the upcoming Starforged game based on the same system.

Also, I joined the guys at the More Games Than Time to help celebrate their 1 year anniversary.  Check out the episode, linked below.

This week Julius and I discuss the no longer latest campaign for the Arkham Horror card game.  I am writing of Innsmouth Conspiracy.  In this campaign, you get to explore Innsmouth and environs and have all sorts of interesting adventures.  This is part 1 of 2 episodes.  In this part, we cover the first four campaigns.  Just a note, but part 2 will not be the next.. give it a bit of time :)

This week, I teach Julius about Fire of Eidolon from Magic Meeple Games and designed by Michael Lipton.  It's a fun little Pandemic style game in which you expand the dudgeon as you explore it and then watch it crumble away as you race to collect the Fire of Eidolon and get out before becoming trapped forever.

I really like this game with all the variability in set-up and options.  Julius is less impressed and says he'd rather play Forbidden Island.

Hi folks!  Another chat with a solo content creator. This time, it's with Jon, the host of the Tale of the Manticore podcast.  This show is a hybrid solo RPG playthrough/ dark fiction podcast. The podcast is a serial story in which "the dice determine" the fate of the characters.  A story is being told and crafted by playing a solo game of Dungeons and Dragons.

Jon does an amazing job of producing a high quality show.  This is an excellent example of what can be accomplished by playing an RPG solo.  It's done without an emulator and Jon takes the role of both character and DM, though primarily DM.  It's an excellent show worth listening to and easy to binge and catch up!

This week Julius and I talk to Jason Tagmire of Button Shy games.  We talk about small games, design contests and the upcoming game ROVE.  It's going to be released on the Button Shy website on Black Friday.  Check it out, it's a neat little spatial puzzle of a game.

This week Julius and I talk about the game Cascadia, the game of the Pacific Northwest, designed by Randy Flynn and published by Flatout Games.  This is a tile laying game in which you are placing tiles with a mix environments and populating them with a variety of animals to try and maximize your score.  It's pretty abstract but it's pretty fun and you can try the solo game on-line to see what you think.  I can say, we like it.

This episode features my Golden Retriever, Kaylee, barking in the background throughout the episode.  I removed a lot of the barks but there is only so much I could do.  Later on, she got into the room I was recording in and started eating the catfood out of the bowl.  I hope all that noise is not too distracting!

It's back to the table for us with Pandemic: The Cure.  This is the classic game of world saving, dice chucking fun.  The game is a dice version of the now classic Pandemic.  Julius and I revisit the game and see how it holds up.

This week I talk about Storm Above the Reich, a GMT game designed by Mark Aasted & Jeremy White.  This is a WWII game in which you simulate the German air defense against American bombers.  You control a group of fighters that try to engage and bring down the American bombers.  The game is a stand-alone sequal to Skies Above the Reich and can be integrated with it to get a much longer campaign game.  I quite enjoyed the game and hope the podcast does a fair job of giving you a sense of what it's like.

Shame on me for also forgetting to mention that GMT currently has Skies Above Britain on their P500.  This is the British equivalent of the game.

Finally, I had my Covid booster yesterday and just feel worn out today.  If I did a poor job of editing this week, well, more poor than normal, then blame that.

Not really discuss but also check these out.

This week, Julius talks about Solenia.  In this game, you ply the winds of a tiny planet trading for goods and stuff on a giant yellow airship.

Get this podcast on your phone!

Play this podcast on Podbean App